(This is a repost from my old blog) 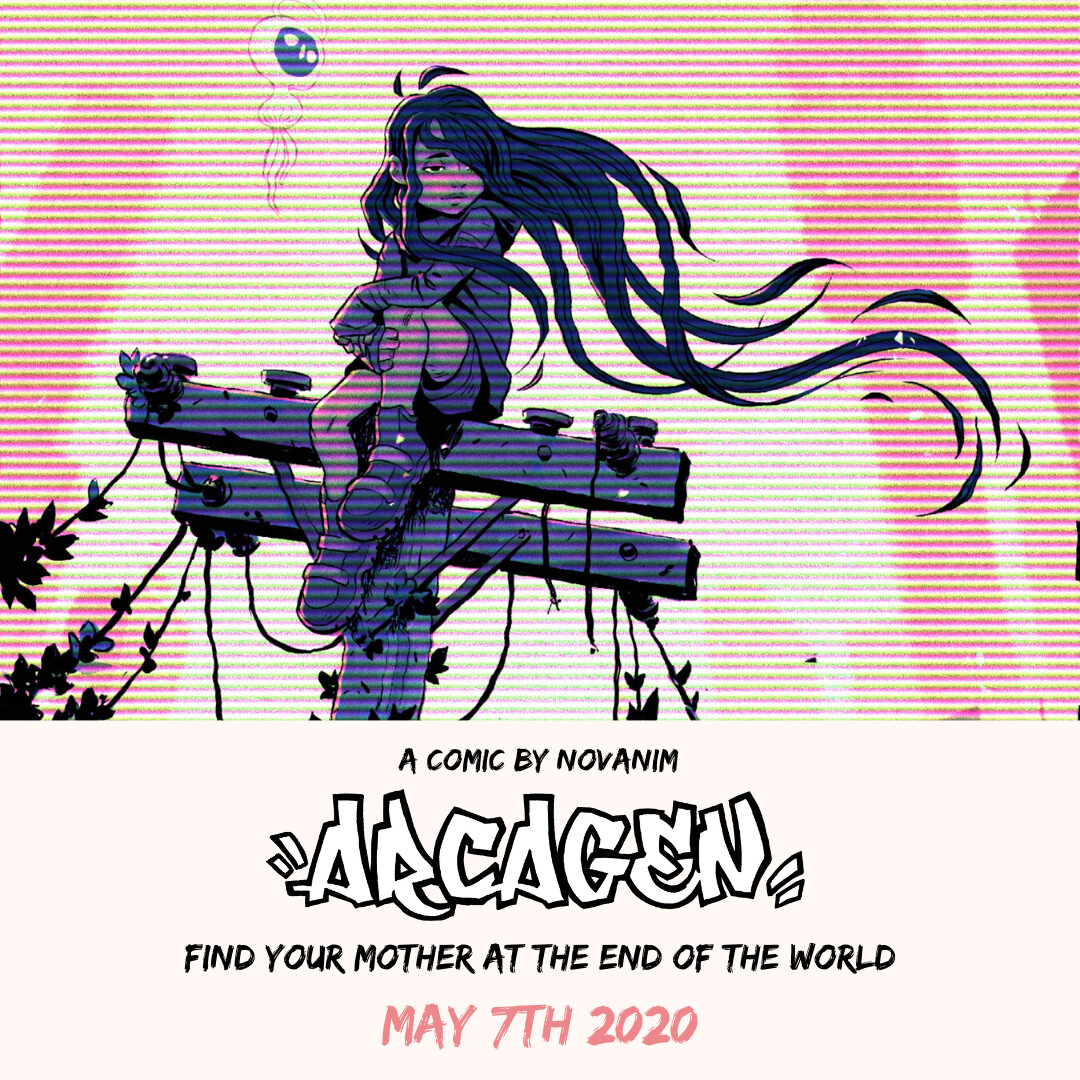 “Document, don’t create”. I receive this idea from Ahmed Aldoori, an accomplished artist that I follow, though I think the quotes is originally from Gary V. The idea behind this is that everyone can be a content creator with a cellphone and an internet connection in the current age. This means you can always document almost everything that happens throughout the day, on whatever activity you like. So, how about making a journal of my current projects? Let me share with you the journey of creating this “neverstarting” comic project. Let me talk to you about Arcagen.

Heck...I’m already doubting myself if I’ll be able to make more than one entry for this journal… but certainly is fun to write once you are in the flow.

Arcagen is a graphic novel that follows the journey of Paloma, an eleven year old girl who looks for her missing mother, in a city where all adults have fallen asleep. The only clues to find her mother lie in old murals, scattered throughout the city. Paloma, searching these murals high and low, will encounter a strange creature that can be the definitive clue to find her mother. However, the mere discovery of this creature reignites the conflict between two factions who seek dominance over the city, and its dying heart. 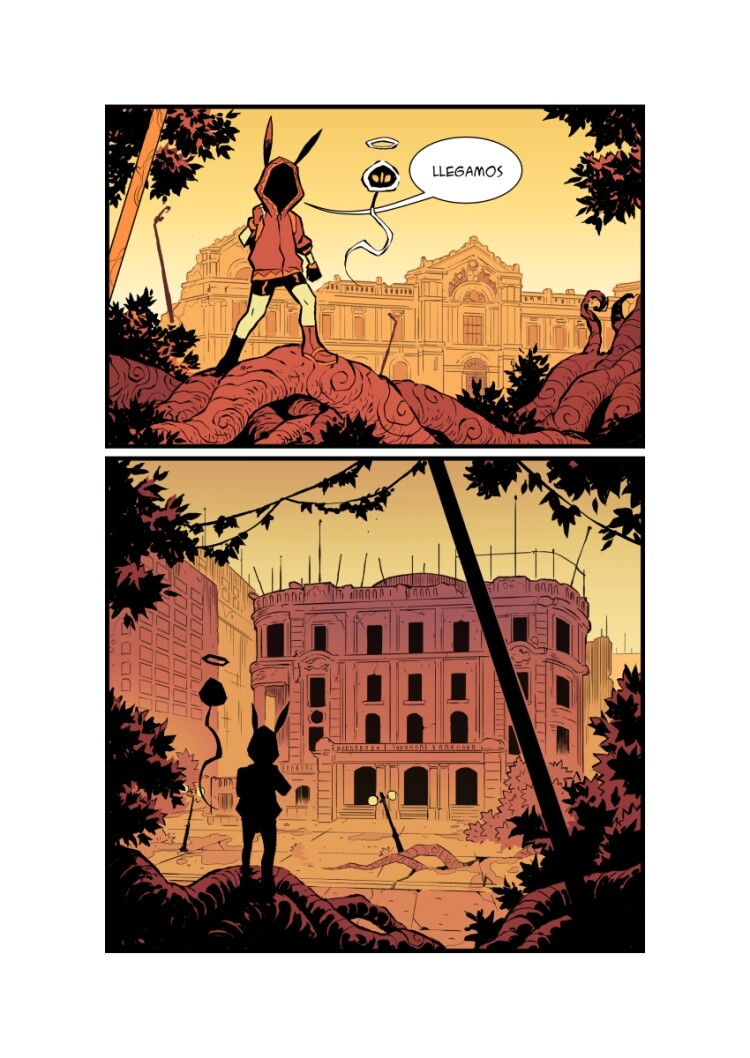 Page 02 of an Arcagen “pilot episode” done for a contest. Paloma seeking for clues. Circa 2016

How was this project born? Well, this was a prequel of another comic, called “Netcontrol”. That story was created on 2002. 17 years ago! By that time, I already got “infatuated” with my own story, which was the typical “This will be my 999 chapter magnum opus” . Then, obviously, I didn’t wanted to mess that “grand creation”, so I created a prequel for it…just to “practice until I got good enough to make Netcontrol”. Guess what happens next: I fell in love with Arcagen too, and it has been so many years, that this “prequel” ended being more important than its progenitor. The years passed, and I used Arcagen as an excuse to create worlds and character, and to hone my craft. At least, that’s was the story I told myself… 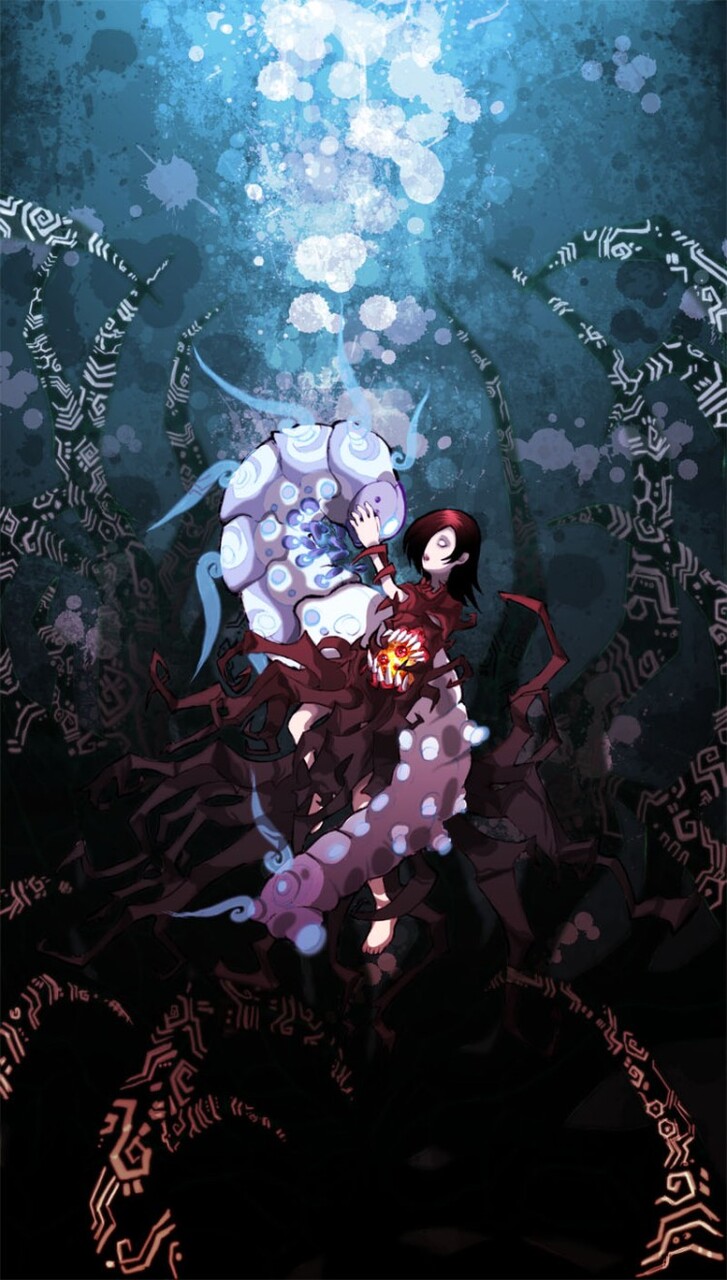 When I started Arcagen, Paloma wasn’t the protagonist, but a very important figure within the story. This was one of her first illustrations. Circa 2008

There’s this big problem with Arcagen: The comic was reset almost every year! That’s right. Every year I advanced the story, layouts, character designs, and even some pencilled  pages…just to abandon the project and starting over just because I told myself “this is not good enough”. And of course, a graphic novel can always, always be improved, but can also be finished you know? Maybe I was too worried about the negative impression my comic would make on other people (specially with social media nowadays. That’s an idea for another blogoid)….and let me tell you, thinking like this is wrong. First, I’m not a famous artist. My work wouldn’t have enough visibility to be noticed at first glance until many, many issues after. Even if I had a huge following, thinking on what bad things others would say about you, or your work (which is hard to separate when you are an artist) should never be an impediment. In the end, resetting the comic was a safe way to silence myself, to have an excuse to never finish anything. It was the way of a coward. 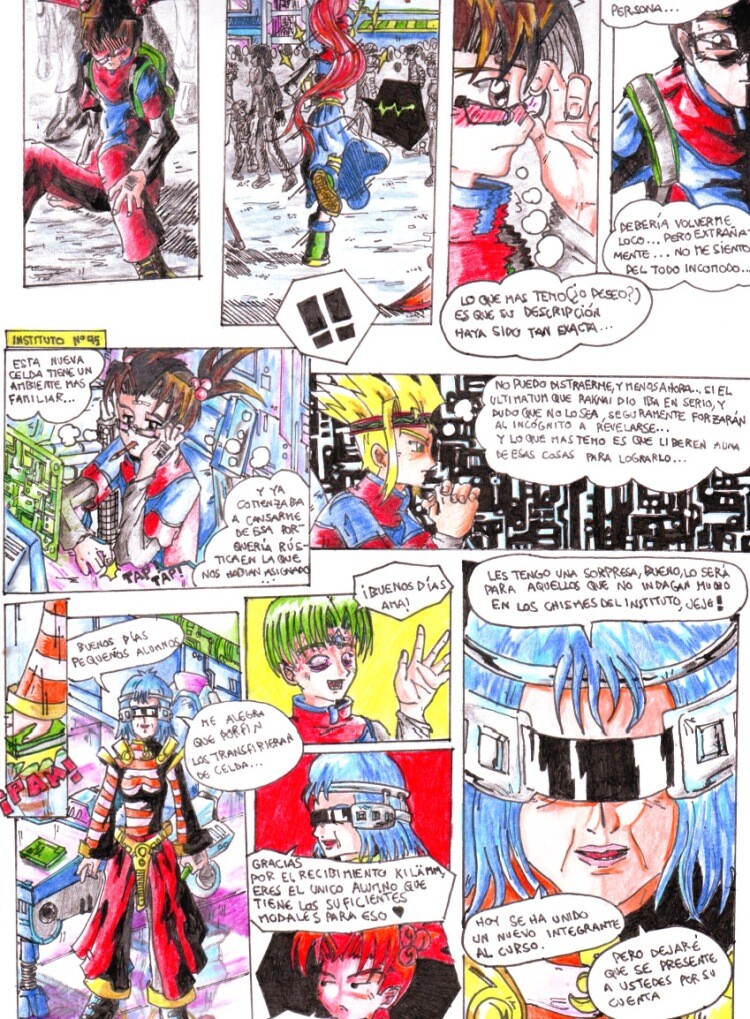 Now, I’m a professional, 10 years of experience. And you know what? I still think I’m not good enough, simply because I can always compare myself to a better artist. But that is not an excuse. So why publish my comic anyway? What’s so special about it that I want you to read it? Maybe it’s not good…but maybe it is!  As an artist, you want to share your vision with the world! Don’t you?  “But I’m too young..too inexperienced…my hands look awful…my writing sucks…I can’t compose a scene…my proportions are inaccurate” all excuses…in the world of Shia Labeouf: JUST DO IT! And that of course, is a message to myself. Every year I grow in confidence, and every year I find out how ignorant and unprepared I am…but to hell with that! Do you think those who make your favorites stories where stopped by their inner demons? Hell NO! 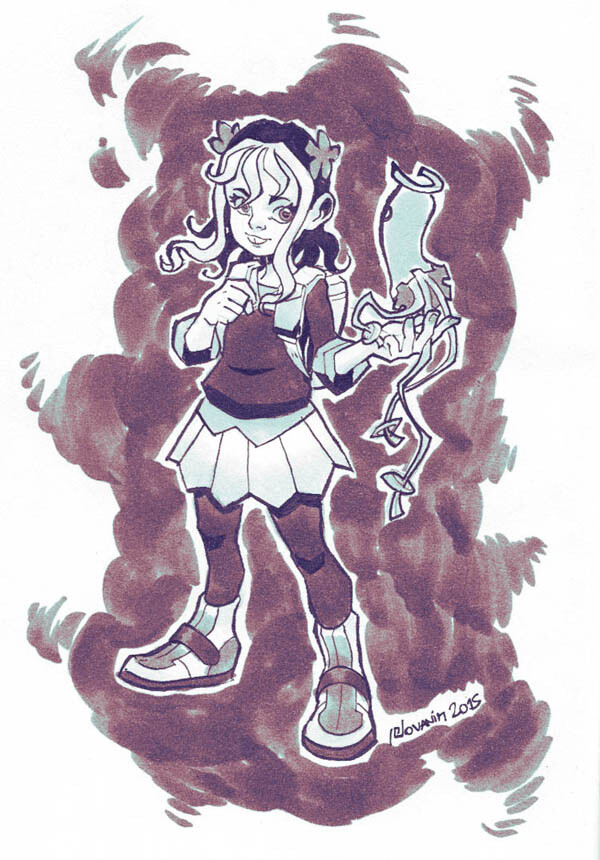 Paloma drawing with markers. I still kinda like it. Circa 2015 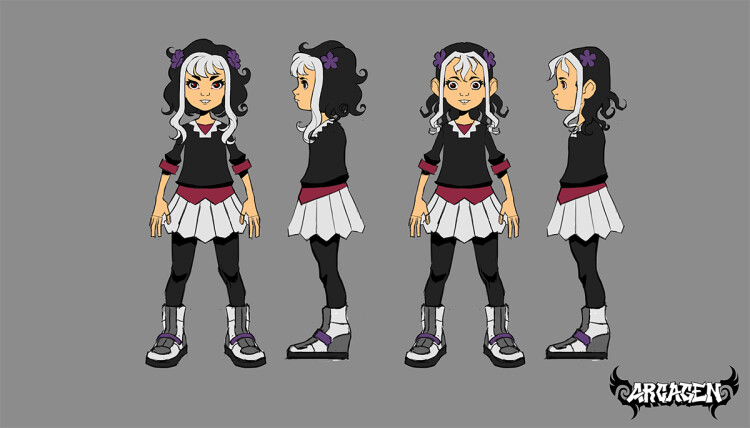 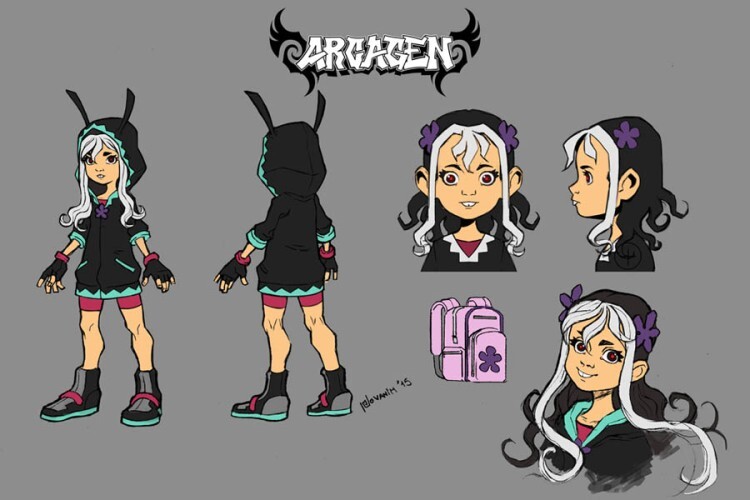 Early character sheets for Paloma, from 2015.

Another good thing about all these personal project thingies, is that they are your personal laboratory. A personal space where I’m able to commit mistakes, experiment, and have only my personal creative limitations. I’m glad I had this idea, being able to play for some many years creating worlds, characters and stories. I just regret not making it early. It is now that I was able of willingly creating habits to advance the graphic at a better pace than ever before. In addition, making these journals is a good way to make myself accountable, and of course, a window to the past for my future self….Hello future Novanim! 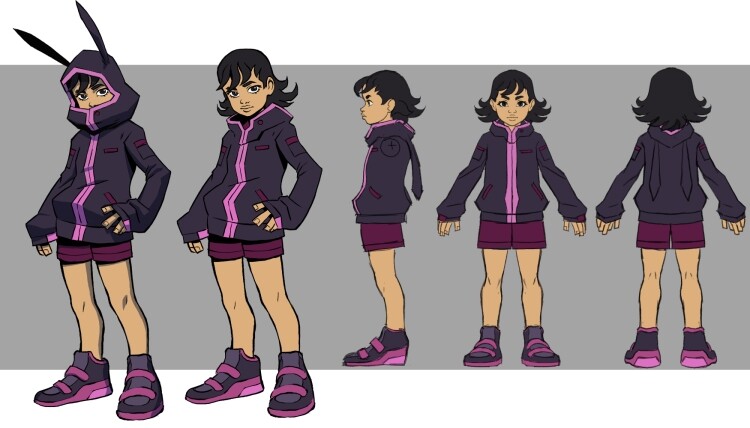 Here’s one of the latest iterations of the character, from 2018.

Working on this personal project also makes me feel happier than any other client work, so it’s a great motivation to get up early. When I wake up, sometimes I think: “what is going to happen to Paloma today?” I have discovered that I’m more efficient during the morning, so after working out, showering and eating, Arcagen is the first thing I do in the morning. I work on it for a couple of hours, and then I start my client work.

Well, this was a faster blog to produce than others, maybe because I’m really enthusiastic about my creator owned story.  With this, I’m closing for today. I hope you enjoyed this entry . Next time, I’ll post more advances of my comic, and I’d also like to talk about character design for this story.

Remember you can already read the comic on Webtoon and Tapas. The new release schedule will be 1 episode per month. I want to extend my gratitude to my patrons on Patreon for helping us along the way.